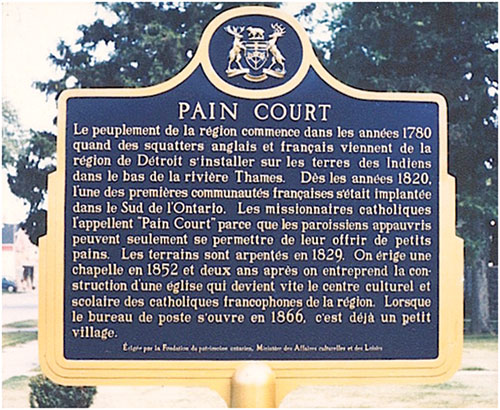 Pain Court (often incorrectly spelled Paincourt), is an agricultural village in southwestern Ontario, Canada, in the municipality of Chatham-Kent. It was established in 1854, as one of the earliest French-speaking settlements in southern Ontario. Pain Court was founded when English and French-speaking squatters from the Detroit, Michigan, area began to settle the indigenous lands along the lower Thames River in the region in the 1780s. It derived its name from the small loaves of bread which the impoverished parishioners offered to Roman Catholic missionaries.

By the 1820s in the nearby "Pain Court Block", one of the earliest French-speaking (franco-ontarian) communities in southern Ontario had developed. Named Pain Court (literally meaning "short bread") by Catholic missionaries in reference to the small loaves of bread which was all the impoverished parishioners could offer, the settlement was surveyed in 1829. In 1852 a chapel was built and two years later construction of a church commenced. It quickly became the cultural and educational centre of French-speaking Catholics in the area. By 1866 when a post office was established, a small village had developed.

Pain Court, situated on the banks of the historic Thames River, near Lake St Clair in Southwestern Ontario has a rich agricultural history. The first settlers, from Quebec, arrived in the area in the early 1800’s to work the land. The community prospered after many difficult years.

Want to grow a business in Pain Court? We’re here to help! SharpShooter Funding is servicing small business owners in Pain Court with all their capital needs. Whether it is a long term funding package or a short term cash funding, apply online or contact us so we can expedite your request. We are your Pain Court Business Funding source. Apply today for business funding in Pain Court.